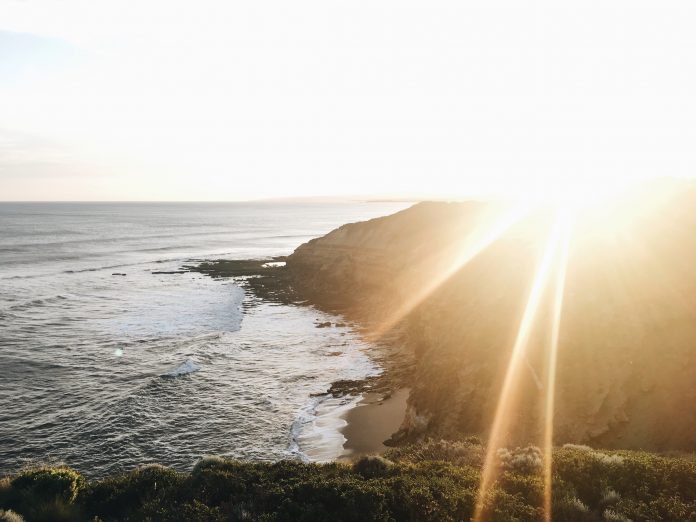 Ultraviolet radiation is a part of the sunlight spectrum that reaches the earth. It has wavelengths shorter than visible light, making it invisible to the naked eye. The UV light has a wavelength between 10 to 400nm.

The UV light is broken down into three types of UV bands: UVA, UVB, and UVC.

They decrease in wavelength from A to C, however, increases in intensity. Both UVA and UVB enter the atmosphere and play a significant role in conditions such as skin cancers, eye damage and premature skin aging by harming the skin’s cell DNA.

In this topic, the focus will be predominantly on the two UV light groups: UVA vs UVB.

What Are UV-A Rays?

In comparison to the second and third category, these beams are known as long-wave or black light waves. They are part of the UV light band that has a wavelength between 320-400 nanometers long. UVA light represents up to 90 to 95 percent of the UV radiation reaching the Earth’s surface. Though they’re less intense than UVB, UVA beams are 30 to 50 times more predominant. They are available with relatively equal measure during the day and can penetrate glass and clouds.

UVA is additionally divided into two wave spectra, UVA I and UVA II. UVA I measures 340-400 nanometers, and UVA II extends from 320-340 nanometers. UVA beams can penetrate through windows, light clothing, and windshields. Moreover, these beams have a similar strength regardless of how near the earth is to the sun.

UVA was once considered to be safer than UVB, yet these beams might be more harming to the body than UVB beam.

Although contrary UVB causes sunburn, UVA infiltrates the skin more deeply, leading to wrinkling, leathering, cracking and shrinking of collagen and elastin, and additionally the distraction of vitamin D and A.

Recent research has demonstrated that UVA beams harm skin cells in the basal layer of the epidermis, where most skin cancers happen. Therefore, UVA exposure can contribute to and may even initiate skin cancer.

What are UV-B Rays?

UV-B rays are known as short-wave rays. This is a type of UV light that has a wavelength between 290-320 nanometers long.

While UVB makes up just 5-10% of solar radiation, its high intensity harms surface epidermal layers and cause sunburn.

These beams are strongest in the summer months particularly when the sun is highest in the sky around noon. They are additionally strongest at the equator. So, less atmosphere implies more UVB.

UVB rays don’t penetrate as deep into the skin as UVA beams, yet they are as still harming.

They are the primary cause of skin blushing, sunburn, and skin cancer. UVB beams don’t penetrate glass. This is the reason you can drive for quite a while on a sunny day without getting sunburn on your arms when the windows are up.

How About UV-C Rays?

UV-C rays are the strongest and most-deadly, however, the radiation does not enter the atmosphere, because it is stopped by the ozone layer. The light has been synthesized and it’s currently used mainly for killing germs and bacteria.

I would mention here the medical industry, but also devices as ultraviolet magic wands or “phone” sanitizers. I’ve put together a list of the best UV phone sanitizers you could find on the market. It’s worth checking it out!

Effect of UVA on the Skin

UVA, which penetrates the skin more profoundly than UVB, has for some time been known to have a remarkable impact on skin maturing and wrinkling (photoaging).

However, up to this point, researchers trusted it didn’t lead to significant harm in areas of the epidermis (external skin layer) where most skin cancers happen.

Research over the past few years, however, show that UVA harms skin cells called keratinocytes in the basal layer of the epidermis layer, where most skin cancers occur. (Basal and squamous cells are types of keratinocytes.) UVA contributes to and may even cause the development of skin cancers.

UVA is the dominant tanning ray, and we now realize that tanning, regardless of whether outside or in a salon, causes cumulative damage after some time. Tan results from harm to the skin’s DNA; the skin darkens in a flawed attempt to prevent more DNA damage. These imperfections can lead to skin cancer.

Tanning booths emit UVA. The high-pressure sunlamps used in tanning salons emits doses of UVA as much as 12 times that of the sun. Of course, people who use tanning salons are 2.5 times more prone to develop squamous cell carcinoma, and 1.5 times more inclined to create basal cell carcinoma. As indicated by recent research, first exposure to tanning beds in youth increase melanoma chance by 75 percent.

Effect of UVB on the Skin

UVB, the main source of skin blushing and sunburn, tends to harm the skin’s more shallow epidermal layers. UV-B ray plays a vital role in the growth of skin cancer and a contributory role in tanning and photo aging. Its intensity varies depending on the season, area, and time of day. Additionally, UVB rays can burn and harm your skin year-round, particularly at high altitudes and on reflective surfaces, for example, snow or ice, which bounces back to 80 percent of the beams which hit the skin twice. UVB beams don’t essentially penetrate glass.

For an easy approach to remembering the distinction think “B” for burns and “A” for aging.

While assessing UVA versus UVB tanning bed in regards to harming impacts, there is trade-offs related to each type. UVB rays are related to more serious health impacts, for example, skin cancers while UVA beams are related with skin damage- including wrinkling, age spots, and fine lines.

Having known the distinction between UV-A and UV-B rays, what would you be able to do to shield yourself from them at the same time? Protecting your skin from the sun’s ultraviolet (UV) beams is an among essential things you can do to avoid skin cancer, premature aging, and different types of sun damage.

The ultraviolet radiation does not penetrate any deeper than the skin and has been associated with various types of human skin cancers. Having known the difference between the two UV light bands, your protection is essential.

The Sunshine can provide a lot of benefits for the skin and overall body health; but as just about everybody knows, too much exposure to the sun’s ultraviolet lights can be harmful, leading to premature aging, contributing to some types of vision loss, and even increasing the risk of skin cancer. Take caution!