Restless Legs Syndrome, commonly referred to as RLS, is a health condition that causes unpleasant sensations in the legs. The scientific name is Willis-Ekbom Disease (WED).

It’s considered a neurological sensory disorder with symptoms that are actually produced in the brain, not the limbs.

The sensations are commonly described as creeping, crawling, pulling, aching, throbbing, itching and even sometimes like electrical impulses, which results in an urge to move the affected limbs.

This syndrome will always impact both limbs… legs mostly but can also affect the arms.

Restless Legs Syndrome is a stand-alone condition that doesn’t eventually lead to other serious conditions but symptoms do range from bothersome to incapacitating.

It’s estimated that somewhere between 5-10% of people have RLS. Women suffer more than men but it can begin at any age though typically not until after the age of 45 though even children can develop the syndrome but only about 2-4%.

The syndrome causes exhaustion with daytime fatigue which tends to lead to decreased concentration, therefore school or work performance is impacted. Sleeping less also leads to impaired memory and slowly starts to contribute to anxiety and depression.

In most cases, there is no known cause but researchers have discovered these as possibilities:

Of course, research is always being done and new possible causes continue to be discovered.

It’s possible that many people with the diagnosis of Restless Leg also reported having some form of systemic inflammatory disease or immune disorder which made their RLS symptoms worse.

Another association is between Irritable Bowel Disease (IBS) and what is called small intestine bacterial overgrowth which is exactly what it sounds like.

The difference is that with the bacterial overgrowth it can lead to the same symptoms as irritable bowel. Either way, these would also be considered inflammatory diseases.

Vitamin D deficiency…Researchers are beginning to investigate the link between Vitamin D and an increase in dopamine levels. Vitamin D has been recommended for years to aid in Seasonal Affective Disorder so it should be effective in the same way to increase dopamine in the body; the dopamine is just used in a different way.

Magnesium is another mineral that is required by the body and if a person is lacking this it can cause problems with the way nerve impulses to pass through the body and increase muscle contractions and cramps.

This is in its infancy in research as well but magnesium is being viewed as a muscle relaxant that helps regulate nerves and muscles instead of letting calcium affect the nerves.

Note should be made that Calcium, if deficient, can cause muscle cramps so finding balance is essential in managing RLS. 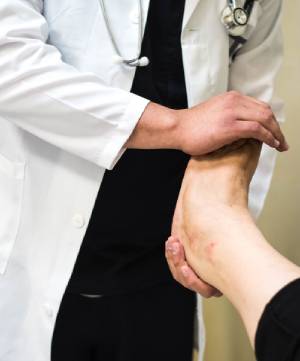 Getting a diagnosis is important because of the potential for it to be a side effect of other health conditions, some of which require treatment that could reverse what was thought to be RLS such as iron deficiency.

The doctor will do physical and neurological exams and run blood tests to check iron levels and any other causes.

You may also be referred for a sleep study to rule out any other sleep disorders but only if other issues are identified suck as sleep apnea.

A sleep study is not required to diagnose RLS.

It has been found that certain medications – generic or branded, activities and environmental triggers can worsen symptoms of RLS but are not the cause.

The medications that can make symptoms worse include:

Talking to your doctor about alternatives medications might be required to aid in reducing your symptoms.

If the underlying cause is iron deficiency then iron supplements should eliminate both the iron deficiency and the restless leg symptoms that you have been having with it. It should also lessen or eliminate any fatigue you were having prior to diagnosis.

Most treatments focus on lifestyle changes and if they are not effective then the last resort would be trying different medications.

The medications used for RLS:

RLS is considered a lifelong condition with no cure at this time.

Therapies can control the syndrome but not always. People with RLS can experience remissions during the early stages for anywhere from days to years but symptoms typically resurface and become more severe over time.

Despite starting off mild and not requiring treatment, that will change over time.

Sleep with a Bar of Soap

Since people who suffer from Restless Leg Syndrome don’t find much relief from what is provided to them medically or they don’t like the side effects they, like many people with other conditions, tend to look for alternative methods to find relief.

Many people want to use more natural methods as many of the medication options come with significant side effects.

Though it started as an old wives’ tale, sleeping with a bar of soap in bed has been widely adopted and those using this method have been finding it successful and sharing their successes online.

This anecdotal evidence has made its way all the way to TV on medical shows like The Doctors and Dr. Oz and there isn’t concern by these individuals that there is no research that supports the use of soap at this time.

Those who suffer from RLS aren’t concerned with the evidence because it’s effective.

This method is simple. It’s recommended you place a bar of soap under the sheet you sleep on, the bottom sheet.

It doesn’t have to touch you or be under you, it just has to be in bed. There are multiple reports that Dial is not effective and most people have said to grab a bar of Ivory and tuck it in there.

If you want something with more scent, Irish Spring is another brand that was mentioned in multiple posts.

If you have been diagnosed, and even if you haven’t but are pretty certain Restless Leg is what you suffer from, and nothing else has worked for you, or maybe you want to try a method that does not require medications, this method is non-invasive and won’t do any harm.

Michael Smith - December 22, 2020
0
Looking for one of the best air purifiers in the industry? Are all the other air purifiers not cutting it for you?The state-of-the-art Airthereal...

Michael Smith - December 16, 2020
0
Did you know that the indoor air is 3 times more polluted than the outdoor air? That should raise a big warning sign for...

Michael Smith - May 4, 2020
0
Are you getting allergic reactions from too much dust and other particles in the air? Don't you just want to be able to breathe...

Michael Smith - November 10, 2019
0
Pain is an unpleasant sensation with varying degrees between mild and agony. Pain scales range from 1-10 and some scales have faces to help...

Michael Smith - August 9, 2019
0
Most often, when we are feeling overwhelmed in life, by work, home, and other obligations we talk about the stress we feel.The pressure is...